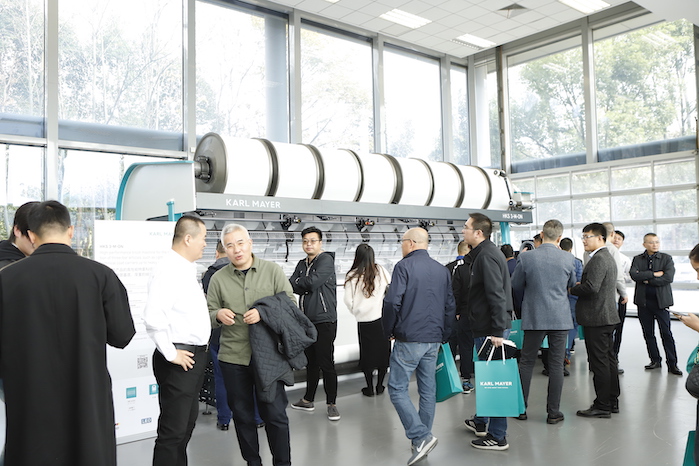 Karl Mayer welcomed around 400 guests from more than 220 textile companies at its location in Changzhou from 25-28 November 2019. Most of the visitors came from China, but some also came from Turkey, Taiwan, Indonesia, Japan, Pakistan and Bangladesh, the German machine manufacturer reports.

Despite the current difficult economic conditions, the mood during the event was good, Karl Mayer reports. “Our customers are used to cyclical crises. During the low, they are preparing themselves for new market opportunities and new technical developments in order to start from pole position when business picks-up,” says Armin Alber, Sales Director of the Warp Knitting Business Unit at Karl Mayer (China).

Many of the managers, company owners, engineers and textile experts had learned about Karl Mayer’s latest innovations through the reporting on ITMA in Barcelona, and in Changzhou they are said to have convinced themselves of the advantages of the solutions. Some investment projects were also signed.

In the lingerie sector, the RJ 5/1, E 32, 130″ from the new commodity product line was shown. Convincing arguments of the newcomer are a very good price-performance ratio and products that minimize the making-up effort. This especially includes plain Raschel fabrics with seamlessly incorporated, lace-like decoration tapes, which do not require hem on leg cut-outs and waistband. The first machines are currently being negotiated with customers in China and several specific project discussions were held during the in-house show.

For the manufacturers of shoe fabrics, the company presented the fast RDJ 6/1 EN, E 24, 138” offering wide-ranging patterning possibilities. The double-bar Raschel machine with piezo-jacquard technology produced a sample for the in-house show in which the contours and functional details such as stabilization structures were created directly during the warp knitting process. The first machines went into operation in December – more than 20 machines had been sold to the Chinese market. Further orders are expected after the event.

Representatives of the home textile industry were impressed by the WEFT.FASHION TM 3, E 24, 130″, displayed at Changzhou. The weft-insertion warp knitting machine produced a fine, transparent product with an irregularly puffed-up fancy yarn. The finished curtain sample resembles a woven fabric in its look, but is produced much more efficiently and without the elaborate sizing process. Visitors from the important curtain country of Turkey as well as many manufacturers from China were particularly interested in the patterning possibilities of this machine. A first WEFT.FASHION TM 3 will start production here in early 2020.

“In addition, the TM 4 TS, E 24, 186” terry tricot machine impressed in Changzhou with up to 250% higher output than air-jet weaving machines, approximately 87% less energy and production without a sizing process. One of China’s largest towel manufacturers signed a cooperation agreement on site,” Karl Mayer says.

The HKS 3-M-ON, E 28, 218“showed the production of tricot fabrics with the possibilities of digitization. Lappings can be ordered in the Karl Mayer Spare Parts Webshop, and the data from the KM.ON-Cloud can be loaded directly onto the machine. Karl Mayer says, the demonstration convinced the visitors of the digitalization concept. In addition, the articles are changed thanks to the electronic guide bar control without the previously required mechanical modifications. Any stitch repeat is possible without tempi change.

The ISO ELASTIC 42/21 presented at this event, is an efficient DS machine for the midrange segment for elastane warping on sectional beams. This is geared towards the standard business in terms of speed, application width and price, and offers a high-quality fabric appearance. In particular, manufacturers of elastic warp-knits who want to take over the warping on their own, were very interested.

At the in-house show, Karl Mayer’s software start-up KM.ON presented digital solutions for customers‘ support. This young company offers developments in eight product categories, and it has already been successful on the market with digital innovations on the topics of service, patterning and management.

“However, Karl Mayer explains: “KM.ON must still gather pace, this is the conclusion of the Business Development Manager, Christoph Tippmann. The integration speed of new technologies is extremely high in China, because: On the one hand, there is a generation change at the top of the companies. On the other hand, there is a fierce competition in the area of digitization from young IT companies. In this respect, however, KM.ON has an invaluable advantage: The enterprise can rely on Karl Mayer’s excellent know-how in mechanical engineering.”

KARL MAYER Technische Textilien was also satisfied with the results of the in-house show. “There came more and other clients than expected“, says Regional Sales Manager, Jan Stahr.

“The exhibited weft-insertion warp knitting machine TM WEFT, E 24, 247″ should become further established as a production equipment with an outstanding price-performance ratio for manufacturing interlinings in a volatile market environment. In Changzhou the machine attracted a lot of attention and visitors expressed their appreciation for the functionality and easy operation of the machine. Moreover, they had the opportunity to see for themselves how stable and reliable the machine operates,” Karl Mayer adds.

Jan Stahr and his sales colleagues were particularly pleased with the visit of potential new customers. In the run-up to the event, they had especially promoted the WEFTTRONIC II G intended for the production of construction textiles. Although this machine had not been exhibited at the in-house show, it was the subject of numerous conversations. Many interested parties wanted to know more about Karl Mayer (China), about warp knitting as an alternative to weaving, and about the possibilities of glass processing on the WEFTTRONIC II G.

“Enquiries focused on plaster grids. As far as this application is concerned, the first machines will be put into operation in Europe in 2020. In the same year, it is planned to install a machine of this type in the showroom of KARL MAYER (CHINA) for carrying out processing trials with the customers,” Karl Mayer says.

The Warp Preparation Business Unit had a small but select group of visitors with specific interests and questions about the exhibited machines. On show was an ISODIRECT 1800/800 and, thus, a value-for-money direct beamer for the midrange segment. The model impressed by a beaming speed of up to 1,000 m/min and a high beam quality.

Six ISODIRECT models had already been ordered in China, one of which started operation at the end of 2019. In addition, an ISOWARP 3600/1250, this means with a working width of 3.60 m, was first presented to the public. The manual sectional warper is predestined for standard applications in terry and sheeting. In warp preparation for weaving, this machine offers 30% more output than comparable systems customary on the market, and in weaving it shows an increase in efficiency of up to 3%. The sale of the ISOWARP had already successfully started in China.

The exhibited machines were complemented by the CSB Size Box, the core of the ISOSIZE sizing machine. The innovative Size Box operates with rollers in linear arrangement according to the principle ‘3 x immersing and 2 x squeezing’, ensuring highest sizing quality.